We recommend 4-5 players for Around the bottle

What do you need:

A deck of cards

How to play Around the bottle: 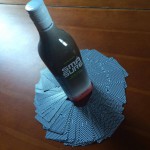 Put the bottle in the middle of the table, remove the jokers from the deck and put the cards in a circle around the bottle. The first player start by drawing af card. 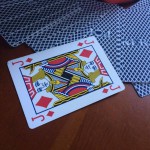 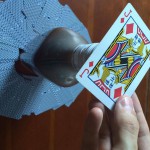 Depending on the number and colour on the card, something different happens. When you are done with the card, you must put it on top of the bottle. If you break the circle of cards around the bottle or if you make the cards drop from the top of the bottle, you must take a shot or another punishment.

6: Toilet/smoking card – you can only leave the table, if you an put this card on top of the bottle before you leave. If you leave without having done this, you have to take 6 shots as a punishment.

7: 7-table – The person who draws the card starts the 7-table by saying 1. The next person then continues the counting by saying 2, the next says 3 and so on. Every time the number 7 occurs you have to say “boom” instead. Both numbers in the 7-table and numbers that include 7 like 17 or 27.

The first person to make a mistake must drink 1 finger for each round the counting has continued.

8: Category – The person who draws this card must choose a category. Now everybody have to say things that are in that category. It can be animals, make-up brands, capital cities or for the very smart: alcohol brands. (Hint hint: they are everywhere on the website) The first person who can’t say a new thing from the category must drink 1 finger for each round the category have “survived”.

9: Rule – The person who draws this card must make a rule for the game. It can be everything from having to stand up when you drink or that the girls must drink double every time. The rule is valid until another rule card is drawn or the game ends.

10: Waterfall – Everybody must start drinking, without any breaks. Only when the person who drew the card stops drinking, the next person must stop and so on. The person on the wrong side of the one who drew the 10 is the unlucky one here.

King: The person who gets the king must now put the card on his/her forehead. This is easily done by licking on the back of the card. The king may now decide whatever he/she wants to happen. The king can make people drink, make bad rules in their own favor and so on. The king loses his/her power when the card drops or if another person becomes a king. It is possible for the other players to assassinate the king, but the king is not allowed to observe it. It must be a stealth assassination.