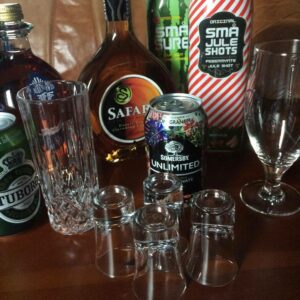 We recommend 4+ players for the vikings gift drinking game.

1-2 dices (Depending on how many players)
Alcohol or other beverages for the glasses
2-3 glasses for each player. (Using different sizes and getting them randomly can make the game funnier)
A stopwatch (Most phones have this)

How to play the vikings gift drinking game:

Start by dividing the glasses between all the players. Each player is now responsible for filling up the glasses they have got, with whatever they like. When all players are done, the drinks are all put into the middle of the table. The point of the game is to give the drinks to other players and avoid getting them yourself.

The game starts with the players rolling the dices in turns, trying to hit a 6. If you get 6, you pick a drink and gives it to one of the other players (without anyone drinking anything yet). If you don’t get a 6, you pass it on to the person next to you. The game continues in this way until all the drinks have been placed in front of players.

Next step is for one of the players to set a timer on the stopwatch (5-15 minutes) without telling anyone else how much time they have. The game now continues in the same manner as before, but now you can only give away your own drinks. If you get 6, you can’t choose to keep a drink.

The game ends when the time runs out and the players must empty all the drinks standing in front of them.